How Does Neurofeedback Help Trauma?

This is a question I am asked consistently, as I talk to people who have experienced trauma, and want to know how neurofeedback might help. Before answering, I would like to start by defining trauma. Have you or a family member or friend ever had a deeply stressful or disturbing event that felt overwhelming, made you feel helpless or hopeless and caused you to feel great discomfort or fear? Trauma is the response to situations like these and can cause an individual to lose the ability to cope, feel helpless and diminish one’s sense of self and ability to feel a full range of emotions and experiences (APA). Trauma effects people of all ages and can create symptoms of hyperarousal, such as sleep problems, irritability/anger, concentration problems, behavior problems, hypervigilance as well as re-experiencing the events that caused the trauma and avoidance.
The causes of trauma can be physical, sexual or verbal abuse, car accidents, weather-related disasters, prolonged hospital stays, violence, war, deaths, being bullied or any circumstance that creates an overwhelming situation. Trauma causes the emotional centers of the brain to become “hyper alert” to danger which then causes the brain to prepare for fight or flight which, in essence causes the rational brain to become irrational and lose proper control over the emotional brain. Neurologically, this trauma response stimulates excessive brain wave activity, in the right temporal lobe, which is the fear center of the brain, and when combined with too much frontal slow-wave activity (The Body Keeps Score, by Bessel Van der Kolk), causes the emotional brain to dominate the frontal cortex that operates reason and logic. Research shows that calming the fear center, which is part of the emotional brain, decreases trauma-based problems and improves executive functioning (pre-frontal cortex). This is reflected not only in a significant decrease of trauma, for the individual, but also in improved mental clarity and increased ability to regulate emotions in response to relatively minor as well as more significant triggers.
How then does neurofeedback help to treat trauma? With neurofeedback, the goal is to regulate the disproportional brain wave patterns that promote and sustain conditions of fear, shame and rage. It is the repetitive firing of these abnormal brain wave patterns that keep trauma at the forefront of an individuals’ thought process. Those who have experienced trauma need help to change the habitual brain patterns created by the trauma and its aftermath. When the “fear” thought patterns relax, the brain will become less susceptible to automatic stress reactions and will be better able to focus on ordinary events. Neurofeedback simply stabilizes the brain and increases resiliency allowing an individual to develop more choices in the way they respond to situations. One client, treated at RenuYou, stated…”it wasn’t until I began neurofeedback therapy that I was able to calm down enough to stop dissociating and finally connect with my therapist in order to work on alleviating the memories of trauma”. 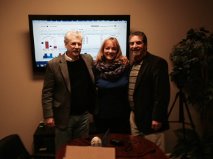